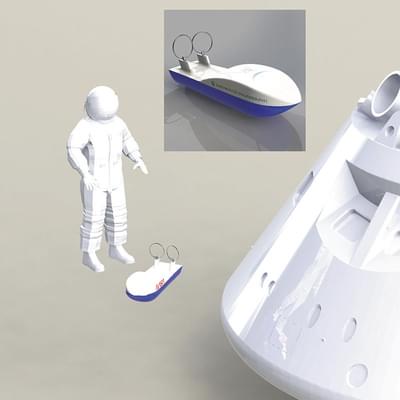 BE students Mit Patel Th’21, Garrett Rawlings ’20 Th’21, Rafael Rosas ’20 Th’21, Andrew Skow ’21, and Ty Teodori ’20 Th’21—with advisor Professor Laura Ray—are finalists in NASA’s Micro-g Neutral Buoyancy Experiment Design Teams (Micro-g NExT) competition. The challenge was to design a self-driving and self-navigating marine surface vehicle to help in the case of an unplanned maritime egress during the 2024 Artemis mission to the moon. “Space mission frequency and crew sizes are both increasing, so in an emergency—such as a launch abort or capsule re-entry—first-responders will be stretched thin,” says Rosas. “First-responders could deploy our Surface Autonomous Vehicles for Emergency Rescue (SAVERs) to astronauts in distress and provide essential first-response and survival equipment.” One of the greatest challenges has been designing remotely during COVID-19. “We are incredibly proud of the quality of work we have been able to collaboratively produce while working over Zoom,” says Rosas. The team was back on campus for winter term, prototyping and optimizing SAVER’s subsystems in preparation for a preliminary design review in February. “We plan to conduct several of our tests, including drop dynamics and autonomous navigation system, in Zimmerman Pool,” he says. The prototype is due by the end of May, with testing scheduled for mid-June in the NASA Johnson Space Center Neutral Buoyancy Laboratory in Houston, Texas.

NAMED: Professor Jifeng Liu—whose research focuses on renewable energy and reducing the energy consumption of information technology through integrated photonics—has been named a fellow of The Optical Society.

APPOINTED: Professor John Zhang has accepted a temporary appointment as program director in the electrical, communications, and cyber-systems division of the National Science Foundation.

PUBLISHED: Dean Alexis Abramson coauthored a paper in a December issue of the Public Library of Science’s Plos One journal on using virtual energy audits to identify buildings’ energy-saving opportunities.