The Battle Against COVID-19

One common theme dominated headlines and conversations around the world in 2020: COVID-19.

As the number of cases across the nation and the world rose ever higher, scientists from all corners of the earth became singularly focused on preventing and treating the deadly SARS-CoV-2 virus. In the first six months of the year, more than 23,000 scholarly articles were published on the Web of Science and Scopus alone. By the end of the year, the World Health Organization database had logged nearly 150,000 articles about coronavirus.

Dartmouth engineering faculty, staff, and students were compelled to contribute to these efforts. And last spring, as normal campus activities shut down, many labs geared up to fight the virus and its spread.

Perhaps most notably, engineering professor and biotechnology entrepreneur Tillman Gerngross has raised $130 million in venture capital for his newest company, Adagio Therapeutics, to begin clinical trials of antibodies engineered to protect against SARS-CoV-2. 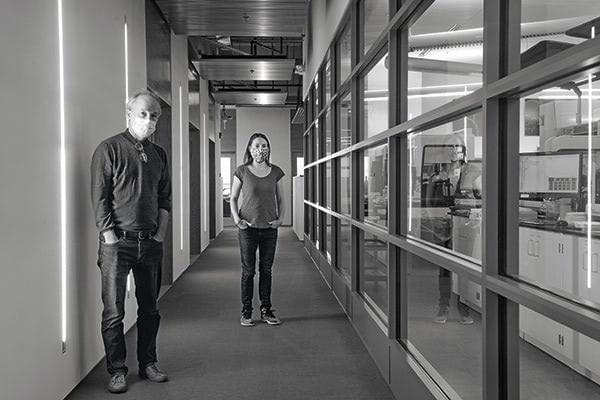 An Adagio team began looking for neutralizing antibodies against SARS-CoV-2 in March 2020, and by spring “knew we had something really special,” according to Gerngross. He is the cofounder and CEO of Adagio and parent company Adimab, an industry leader in translating target hypotheses into therapeutically relevant antibody drugs.

Gerngross filed an investigational new drug application with the U.S. Food and Drug Administration (FDA) in late November and anticipates administering the first dose of engineered antibodies to a human patient as we go to press.

“We isolated, characterized, and engineered monoclonal antibodies from a survivor of the 2002-2004 SARS-CoV outbreak that also react with SARS-CoV-2, the causative agent of COVID-19,” says Daniel Maurer Th’17. Maurer, who spent two years as a predoctoral research associate at Adimab, took a break from his PhD studies at Harvard to return to the Lebanon, N.H.-based company and work on COVID-related projects. He says several of these engineered antibodies neutralize both SARS viruses as well as SARS-related coronaviruses circulating in bats. This suggests the new antibodies have the potential to help prevent and treat current—and future—coronavirus outbreaks.

It’s that forward-thinking possibility that enables Adagio to stand out.

While vaccines have been rolled out across the globe, Gerngross’s team is working on broad neutralization to prevent against the next outbreak. His goal is to develop a biannual injection that would protect against sarbecoviruses, a group of viruses that includes COVID-19.

“Coronaviruses have been spilling over into the human population now in three documented cases during the past 20 years,” says Gerngross. “There is no reason to believe that the spillover is going to end.”

Contributing to Adagio’s success is another familiar face at Dartmouth: Terry McGuire Th’82, chair of Thayer’s board of advisors from 2008 to 2020. McGuire is a founding partner of Polaris Partners, which played a large role in financing Adagio’s efforts.

“I’ve invested in every company that Tillman has started,” says McGuire. “We back him repeatedly. We find his creativity enormous and his candor and can-do attitude extraordinary. What’s beautiful about Tillman is that he’s so incredibly decisive—he’s just an extraordinary entrepreneur.”

Back on Dartmouth’s campus, Professor Jiwon Lee is concentrating on the human immune system. He’s investigating whether the antibodies that help some people recover from the virus can be turned into medicine for others.

“My lab focuses on developing new technologies that allow us to take blood from people whose immune systems have successfully fought off an infection and determine the amino acid sequences of the different antibody molecules in the blood,” says Lee. “For COVID-19, knowing the antibody sequences enables us to test and determine which antibodies are the most effective at neutralizing or preventing the infection.”

Collaborating with clinicians, scientists, and engineers from Dartmouth and the University of Texas at Austin, Lee says his lab is trying to understand antibody responses to COVID-19 and identify antibodies with therapeutic potentials.

“We’re also focusing on collaborating with local companies and research labs,” he says. “We’ve been looking at the quality of antibodies generated by COVID-19 infections and their persistence following recovery from the virus and how they may differ for individuals with different levels of symptoms.”

Across campus, three PhD students in Dartmouth’s molecular and cellular biology program coauthored a study that found COVID-19 patients with milder cases exhibit an increased presence of Immunoglobulin A (IgA) antibodies in their mucosa. The results of the study were detailed in the paper, “Features and Functions of Systemic and Mucosal Humoral Immunity Among SARS-CoV-2 Convalescent Individuals,” pre-published at medRxiv in August.

Their research—conducted with engineering professor Margie Ackerman and Dr. Peter Wright ’64 DMS’65, a pediatrics professor at the medical school—was the first to correlate a type of antibody response to mild disease severity. It also suggests the kind of immune response that could protect against infection and reduce the likelihood of transmission.

“Everyone is wondering how long antibodies will be around after a positive test and how long people are protected,” says co-first author Savannah Butler. “So we measured diverse antibody features and functions, allowing us to see specific characteristics of those antibodies present in patients with both severe and mild disease.” 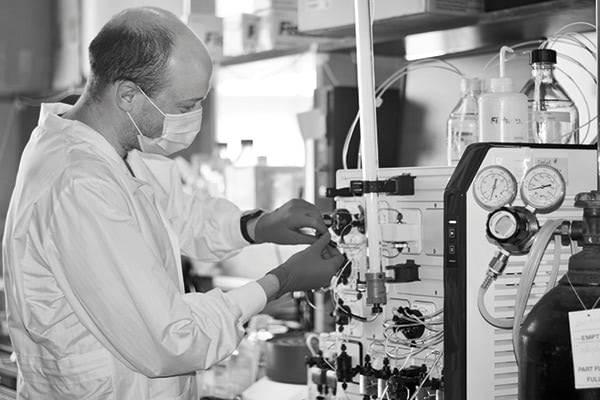 The researchers collected blood, nasal wash, and stool samples from 20 locals one month after they tested positive for COVID-19. They then examined the COV-specific antibody response across the disease and six other endemic human coronaviruses.

Results suggest patients exhibit either a strong IgA response or Immunoglobulin G (IgG) response—but not both. That divergence could help explain the broad range of severity of the disease.

The team is now working on a second study with a cohort of 100 patients and will test for antibodies three and five months after a positive COVID-19 test. Testing multiple times will enable researchers to understand how the antibodies look long-term and how long protection may last.

“We are still looking at similarities and differences between COVID-19-positive patients who were hospitalized and those who were able to recover at home to determine what kind of immune response might lead to a good outcome,” says co-first author Harini Natarajan. PhD candidate Andrew Crowley, who works in the lab as part of the molecular and cellular biology program, also served as co-first author on the study.

Despite the fact that multiple COVID-19 vaccines have been developed and are now rolling out to the nation’s population, there is plenty more to be done. And Dartmouth engineers will remain at the forefront of understanding, treating, and preventing the disease.