PhD candidate Rachael Hachadorian’s essay “A Good-For-Something Second Brain” is one of four recently selected by Nature Communications highlighting the experience of early career researchers. Published earlier this year, her winning essay describes how an unexpected diagnosis of an autoimmune disorder shaped her research and her career. 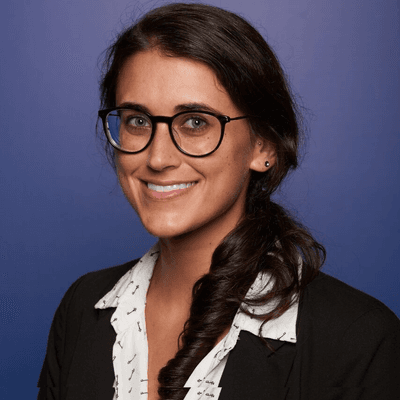 “Despite how positively obnoxious it can sometimes be to manage the symptoms, I doubt I would actually be where I am and studying what I am without it,” Hachadorian said. “Writing it out gave me a chance to organize what motivates me and pay tribute to the series of events that led me here.”

In her essay, Hachadorian describes the exact moment that changed her life. Back in 2012, as a college student in the middle of a physic research internship, she did what she thought was something quite ordinary—crouch behind a computer to check on a cable connection­—but that’s when another physicist pointed out that it looked like a “second brain” was growing out of her knee.

“Quite, unfortunately, it was not a second brain, which could have at least maybe been useful brainpower,” she writes in her essay.

A month later, she was diagnosed with an autoimmune disorder similar to rheumatoid arthritis. Her ongoing experience as a patient, which has involved multiple synovial aspirations, steroid injections, surgeries, and series of medications, has influenced and shaped how she approaches research in engineering medical physics.

“I thought that perhaps I could be helpful to physicians or a greater medical cause if I could offer a perspective different than that of another medical doctor. So far, this has turned out to be rewardingly true. We have helped each other to see and understand things that the other did not or might not have considered.”

Last May, Hachadorian served as first author on a new study published in Nature Communications about imaging Cherenkov emission during radiation therapy cancer treatments, which qualified her to submit an essay for the contest. A call for essay submissions from early career researchers led her to write about her research with her advisor MacLean Professor of Engineering Brian Pogue, other Dartmouth faculty, including Assistant Professor of Engineering Petr Brůža, adjunct engineering professors Michael Jermyn and David Gladstone, and Associate Professor of Medicine at Geisel School of Medicine Lesley Jarvis.

“I originally wasn’t going to submit the piece, but by doing so, it was also another way for me to say thank you, first to the two physicians who originally took over my care, second to the current physicians and engineers I work with, and third specifically to Professor Pogue,” she said. "He is an exceptional PI and advisor and encouraged me to run with the idea in the first place.”

“Rachael has been phenomenal in her focus on taking the Cherenkov imaging tools that we have and using them to create a truly unconventional way to do non-contact imaging dosimetry,” Pogue said. “Her innovation on using computed tomography (CT) scans to update the images is both practical and useful. The productivity and innovation of this approach was exceptionally high. I am very proud of her and all that she has been through during this time, and where she is going in her career.”

Hachadorian, who is scheduled to defend her thesis on March 19, is currently interviewing for residency programs and aims to become a clinical medical physicist responsible for the precision and accuracy of radiation-delivering systems to treat cancer and ensuring optimal patient treatments. Her research focuses on developing the CT correction to address highly-attenuating features in imaging and on developing a way to analyze field match lines in patients.

Read the published paper that qualified her for the contest: Imaging radiation dose in breast radiotherapy by X-ray CT calibration of Cherenkov Light (Published originally in Nature Communications, the work looks to increase the dosimetric accuracy of Cherenkov light in patients by correcting tissue optical properties, which would allow the clinician to determine dose based on Cherenkov images taken during radiation therapy each day, ensuring the full course of treatment was delivered accurately and providing the ability to flag changes in dose.)