Alexis Abramson, dean of Thayer School of Engineering at Dartmouth, has been appointed to a second four-year term, Provost David Kotz '86 announced today.

Abramson, a recognized leader in sustainable energy technology and advanced energy research, joined Dartmouth Engineering as its 13th dean in 2019 and throughout her first four years, has led the School through significant expansion and growth. Her second term begins July 1.

"Under Alexis’s leadership, Thayer has continued to thrive," Kotz said. "Her compassion and vision have helped cement Thayer as a leader in human-centered engineering with faculty and students focused on improving human well-being and bettering our world." 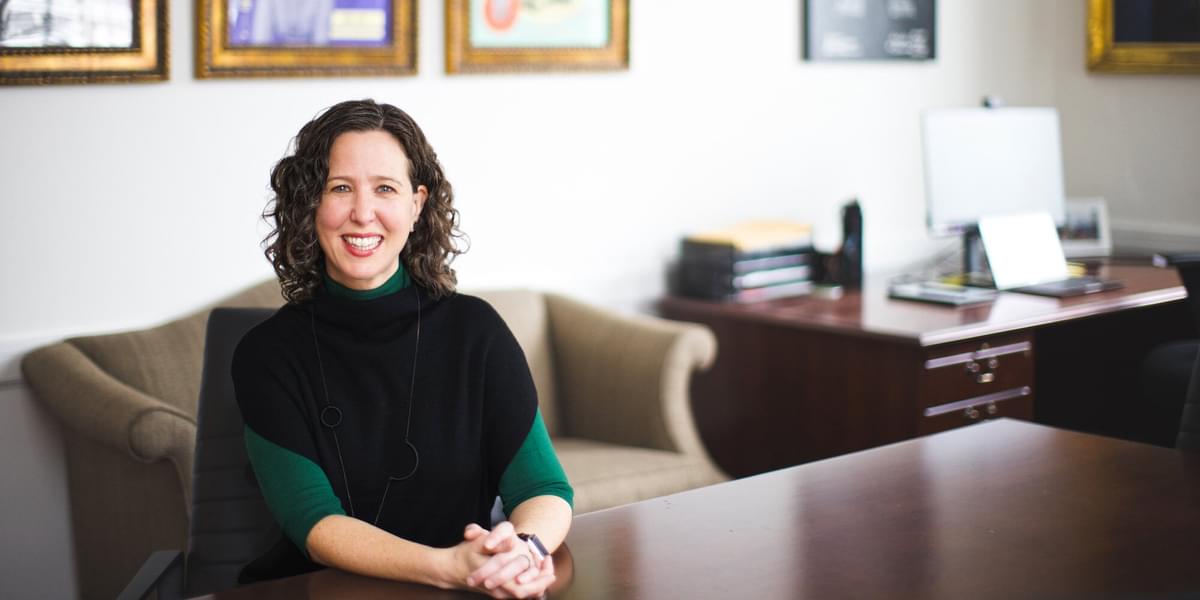 Dean Alexis Abramson has been appointed to a second four-year term. (Photo by Katie Lenhart)

"I am honored for this renewed opportunity to lead this incredible school and continue building on our exciting momentum," Abramson said. "Over the past few years, I have been privileged to work alongside our faculty, staff, and students to carve out and carry forward a shared vision for Thayer. I am excited to continue this collaboration and to find new ways to empower our community to take Dartmouth Engineering to the next level."

During her first year as dean, Abramson led Thayer in a school-wide strategic planning process that culminated with renewed goals aimed at expanding Dartmouth's global impact through human-centered engineering, research, and entrepreneurship and elevating the School's commitment to diversity, equity, and inclusion (DEI). Abramson created two new senior leadership positions specifically focused on expanding equity and inclusive practices at Thayer—with one devoted to enhancing equity and access in faculty hiring and mentoring processes and the other to furthering DEI across the Thayer community.

Abramson reflects on her first four years as Dartmouth Engineering dean and why she is excited to continue developing the School as a leader in human-centered engineering.

Since 2019, Thayer has welcomed 19 new faculty—eight of whom are women—expanding research across biomedical engineering, energy, complex systems, design, and other disciplines. Faculty who identify as women now comprise nearly 27 percent of the engineering faculty as a whole, exceeding the national average of 19 percent.

Thayer has also seen a substantial rise in the number of graduate applications. PhD applications have grown by 64 percent while master of science and master of engineering applications have more than doubled since 2019. At the same time, Thayer has attracted and retained an increasingly diverse graduate student population. Women now comprise 47 percent of the total number of students enrolled in engineering master's programs, which exceeds the national average of 30 percent. In addition, students from underrepresented backgrounds, who are also US citizens or permanent residents, comprise 29 percent of the domestic student population. The national average is 19 percent.

In addition, under Abramson's leadership, Thayer introduced new programs or grew existing initiatives—among them the revamping of the School's master of engineering program, the launch of new online certificate programs in applied data science and digital transformation, increased entrepreneurship and innovation opportunities, and the new Design Initiative at Dartmouth that has expanded access to design thinking and human-centered design methodology across Dartmouth and equips students and faculty with powerful problem-solving tools to solve society's most pressing challenges.

"Alexis has continued to foster a community of students and scholars who understand that the world's most complex problems cannot be solved in silos," said Samantha Scollard Truex '92 Th'93 Tu'95, chair of Thayer's Board of Advisors. "She has not only led Thayer in truly transformative ways, but has helped engaged collaborative learning, research, and innovation across all domains."

Prior to joining Dartmouth, Abramson was the Milton and Tamar Maltz Professor of Energy Innovation at Case Western Reserve University, where she served on the mechanical and aerospace engineering faculty and led the Great Lakes Energy Institute. Abramson had also served as technical advisor for Breakthrough Energy Ventures, a $1 billion initiative launched by Bill Gates to combat human-driven climate change, and during President Obama's administration, served as chief scientist for the US Department of Energy's Building Technologies Office, focusing on investments in the research and development of energy-efficient and cost-effective building technologies.