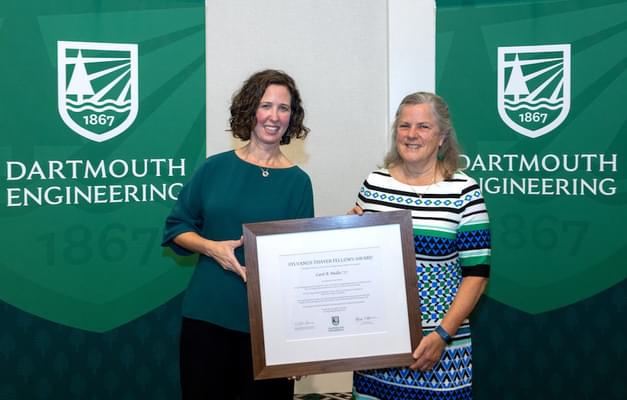 Muller was a member of Dartmouth's second co-educational class and returned to campus in 1987 to serve as Thayer's assistant dean. At the time, she noticed that every faculty member was male. "Nowhere in my job description were the words 'diversity' or 'inclusion,'" said Muller, "but as a feminist with a passion for equal opportunity and concern about occupational segregation, I couldn't support that gendered status quo."

In 1990, with the backing of Thayer's then-Dean Charles Hutchinson, Muller joined forces with Dartmouth chemistry professor and associate dean of arts and sciences Karen Wetterhahn to launch the Women in Science Project (WISP) at Dartmouth, which aims to create collaborative learning environments where women can thrive in the science, technology, engineering and mathematics (STEM) fields. Muller also engaged faculty, senior leaders, and admissions and career services staff to elevate the program to a major part of the Dartmouth experience and obtained funding for WISP from Dartmouth, the National Science Foundation, and the Sloan Foundation.

"It takes not only ideas for change, but the right timing and salience to muster the support for launching something like WISP."

After nearly a decade at Thayer, Muller returned to Stanford, where she had received a PhD in administration and policy analysis, and there continued her work of encouraging more women to join the sciences by providing role models, mentoring, and a sense of community. She founded MentorNet, an online global nonprofit mentoring network, and until her retirement last year, Muller served as Stanford's operating manager for the electrical engineering department and led WISE Ventures, which focused on supporting and advancing campus-wide equity in STEM. Earlier this year, Stanford commemorated Muller's legacy and impact by creating the Carol Muller Outstanding Service Award and naming her the inaugural recipient.

"It's clear that throughout your industrious career, you have been devoted to helping countless students succeed in science and engineering, and here at Dartmouth, you planted the seeds for WISP to continue to thrive and flourish during its 30-year — and counting — tenure on campus," said Dean of Engineering Alexis Abramson.

Thayer's Board also posthumously awarded the 2020 Sylvanus Thayer Fellow distinction to Crump, who passed away last year at the age of 96. Crump served on Thayer's Board for 24 years and invented technologies throughout his career that transformed everything from the processes of removing cataracts and purifying water to the development of bar coding and 3-D printing.

Crump served as a mentor to many notable Thayer faculty and alumni. With his wife, Marjorie, Ralph funded the PhD research of John Collier '72 Th'73 Th'75 Th'77, the Myron Tribus Professor of Engineering Innovation, Emeritus, and established the inaugural Myron Tribus Chair in Engineering. The couple's generous contributions also supported the research of the late Professor Stuart Trembly Th'83 and funded advanced manufacturing and fabrication equipment for Thayer's MShop. The Crumps also established the Ralph and Marjorie Crump PhD Innovation Program Fellowship Fund, which helped launch the nation's first-ever PhD Innovation Program at Thayer. For all of his work, Crump received the Robert Fletcher Award in 1979 from Thayer.

"As a long-time member of Thayer's Board of Advisors, Ralph Crump was a vital member of our community," said Abramson. "It's an honor and a privilege to posthumously name Ralph as a Sylvanus Thayer Fellow in recognition of his extraordinary dedication and support to Thayer."

Crump's children — Scott, Connye, and Craig — wrote, "Ralph Crump was a truly remarkable man" as part of a longer statement that was read aloud at the recent Board dinner.

The distinction of Sylvanus Thayer Fellow was established by the Board in 1978 to honor alumni and friends who have set themselves apart in their commitment and service not only to Thayer, but also to Dartmouth, and to the community at large. The 2020 recipients were originally chosen last year, but the annual celebration was delayed due to the pandemic.