Peter Fahey '68 Th'69 Th'70, a longtime member of Dartmouth Engineering's Board of Advisors, who gave tirelessly and generously his time and counsel to Dartmouth students and leadership, died Saturday, Nov 26, after an extended battle with pulmonary fibrosis. He was 75. 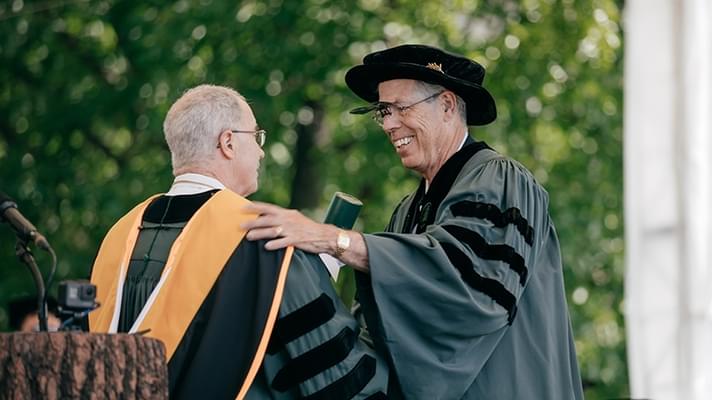 Fahey served on Thayer School of Engineering's Board for more than 30 years, from 1990 until his death, and as a Dartmouth Trustee from 1994 to 2004. In 2003, Thayer awarded Fahey the Robert Fletcher Award, the highest prize in the tradition of the School, for his significant service and contributions to the engineering community. In 2007, he received the Dartmouth Alumni Award, given to "alumni who have demonstrated extraordinary service to Dartmouth and civic organizations." In 2018, Fahey earned an honorary degree of Doctor of Humane Letters from Dartmouth.

"Peter's dedication to Dartmouth is unmatched," said Alexis Abramson, dean of engineering at Dartmouth. "In the time I have know him, I deeply felt his tremendous and long-lasting impact on Thayer. He leaves an incredible legacy."

Fahey earned his AB in chemistry from Dartmouth in 1968, and his bachelor of engineering and master of engineering degrees from Thayer in 1969 and 1970 respectively, and pursued a career as a chemical engineer. He later earned his MBA from Harvard Business School, graduating in the top 5 percent of his class as a Baker Scholar, and starting his decades-long career in corporate finance with Goldman Sachs.