The Institute of Arctic Studies (IAS) will continue to train the next generation of climate change scientists, thanks to a new $1.3 million grant from the National Science Foundation (NSF) supporting the institute's Joint Science Education Project (JSEP) through 2026. 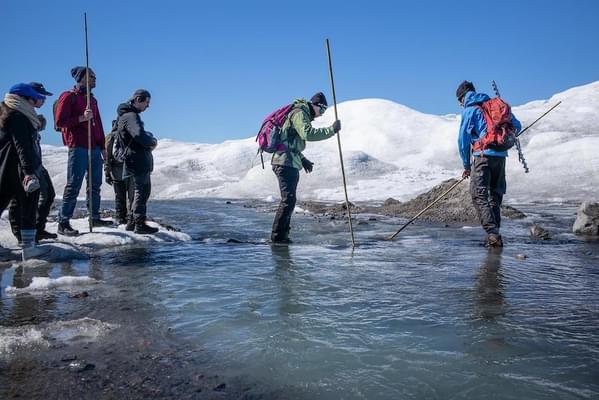 Students in the Joint Science Education Project take glaciology measurements in Greenland in 2021 in research with the Institute of Arctic Studies at Dartmouth. (Photo by Lars Demant-Poort)

In fact, nine students who participated in the JSEP program in high school are now at Dartmouth, thanks to their interest in climate change and the work of IAS, which is part of the John Sloan Dickey Center for International Understanding. Two other JSEP students also attended Dartmouth and already graduated.

"This is wonderful news," says IAS Director Melody Brown Burkins. "JSEP is the institute's longest running grant program, directly connecting the next generation of scholars to the pressing challenges and realities facing diverse peoples and regions of the Arctic, from climate change adaptation to biodiversity loss."

An international collaboration among the US, Greenland, and Denmark, JSEP was founded during the International Polar Year in 2007. High school and university students and teachers from the three countries work together during a three-week field course in Greenland to study polar environments and the human dimensions of rapid Arctic change. In addition to Dartmouth's NSF grant, funding is provided by the government of Greenland. ...

... Graduate students are integral to JSEP's success. From Thayer School of Engineering, Nigerian-born Ayobami Ogunmolasuyi became an online mentor and teacher in 2020, following his graduation from the University of Maryland.

As a PhD candidate and NSF fellow, Ogunmolasuyi is studying how sulfuric acid from volcanic emissions affects the properties of ice. For JSEP, he helped develop and deliver online lessons he wishes he’d had when he was in high school.

"JSEP is an outstanding introductory program because even in online form, it's hands-on," says Ogunmolasuyi. "One of the best things that happened during the last round was that some experiments failed. So the students learned that, OK, in science, some things work, some things don't, and if they don't, you just find a different way to tackle the problem."