Smartphones that last for days on a single charge and are still thin, compact and lightweight. Electric vehicles that drive further with their existing batteries and are affordable. Data centers that meet the growing demands of seven billion internet-connected devices and counting while cutting down their carbon emissions and use of space. For these to become reality, electrified systems need cutting-edge upgrades in the hardware that manages and distributes the power in these systems. 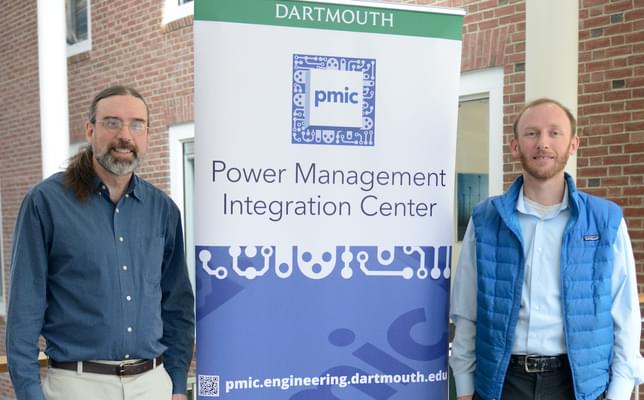 This is a challenge that the University of California San Diego is helping to tackle as a new member of the Power Management Integration Center (PMIC)—a partnership directed by Dartmouth that brings industry and university members together to innovate power electronics technologies that support higher efficiency, smaller size and reduced cost.

Such innovations will be transformative for a wide range of applications such as battery-powered mobile and IoT devices; electrified transportation; renewable energy systems; 5G and 6G communications; and artificial intelligence and machine learning.

"Power management is a big bottleneck in basically every electronic system you can imagine," said Patrick Mercier, a professor of electrical and computer engineering at the UC San Diego Jacobs School of Engineering and co-director of the university's PMIC effort. There are fundamental limitations to how small the power management hardware can be miniaturized, he explained. And these, in turn, limit what kinds of improvements can be made to the size, cost, performance and battery life of the entire system.

"To get around some of these fundamental limitations, we have to be clever about how we architect our circuits and systems," said Mercier. "At PMIC, we are working to achieve this goal by designing and creating new circuit topologies and using energy storage elements in new and interesting ways."

Mercier, along with UC San Diego electrical and computer engineering professor Hanh-Phuc Le, are the co-directors of the center's UC San Diego site.

"We have a very strong team here that combines diverse expertise in the area of power management integration," said Le.

UC San Diego is also bringing its strong connection to industry to PMIC. The team's faculty members have extensive experience recruiting and retaining corporate members to sponsor and collaborate on university projects—these include projects at the UC San Diego Center for Wearable Sensors and Center for Wireless Communications, for example. The UC San Diego team also consists of faculty members who are co-founders of startup companies.

"A big strength of our team is that we have a good understanding of what various tech companies actually need, and that’s what enables us to bring these companies on board with what we're doing," said Le.

PMIC serves as a collaborative research ecosystem where academia and industry can come together to solve fundamental problems and develop next-generation technologies that will advance the field of integrated power electronics. The NSF funding supports the partnership, in which the universities provide the research infrastructure and talent, and industry partners provide research funding and guidance. All industry members vote on the research areas the center should pursue.