The University of Victoria racing team from Canada won first place in the hybrid category at the 2019 Formula Hybrid competition. Armed with a relatively light-weight capacitor-based system, the "UVic Hybrid" team earned top scores for Engineering Design, Acceleration, and Autocross. HyTech Racing from Georgia Tech defended their 2018 first place title in the electric category with high scores in Design and Autocross and also Endurance, finishing all 44 laps of that event.

Founded and run by Thayer School of Engineering at Dartmouth, this year's competition drew 20 teams from across the US and Canada, as well as India, to the New Hampshire Motor Speedway in Loudon from April 29–May 2. Similar to Formula SAE®, Formula Hybrid challenges undergraduate and graduate engineering student teams to build innovative high-performance hybrid and electric race cars while adhering to strict safety standards.

Other results include RV College of Engineering (Ashwa Racing) and UVM Alternative Energy Racing Organization (AERO) earning top honors in the Project Management competition, and Princeton Racing Electric winning the electric-only acceleration event by just one tenth of a second. Dartmouth Formula Racing completed 17 laps to win the hybrid category Endurance event and also logged the fastest times for both Acceleration and Autocross but was disqualified from earning points in those events due to missing the required drivers' meeting.

"2019 was a year of firsts," said Mike Chapman ’76 Th’77, the new Director of Formula Hybrid who has served every year as a judge at the competition. "This was the first year for Jessica Kinzie, our new Coordinating Manager who, even with a six-month late start, did a wonderful job coordinating—sometimes herding—all of the teams, volunteers, and sponsors.

"This was also my first year as Director, transitioning from the founder of Formula Hybrid, Doug Fraser. Working as a volunteer since the start of the competition and as a sponsor for the last six years gave me a jump-start, but leading this year’s competition to a successful conclusion wouldn’t have been possible without Doug, Jess, and all of the many Formula Hybrid volunteers. "Another change," continued Chapman, "was that the Wednesday night student reception was held at the nearby North East Motor Sports Museum. Team members and volunteers enjoyed pizza and were able to see vintage and modern racing vehicles and memorabilia. In the entryway of the museum is a wall of commemorative bricks, soon to include one celebrating Doug Fraser’s retirement from Dartmouth and Formula Hybrid.

"On the down side, this was the first year that our large automotive sponsors weren’t able to participate. While this was disappointing, we’ve already started reaching out to new potential sponsors. We expect that we’ll be able to build next year’s sponsor list with companies like this year’s first-year sponsor McLaren Applied Technologies."

Doug Fraser, Senior Research Engineer at Thayer School of Engineering at Dartmouth and Founder and Director of Formula Hybrid for 12 years, will retire this spring. Fraser was awarded the Carroll Smith Mentor's Cup by Formula SAE® and the Sports Car Club of America (SCCA) in recognition of extraordinary levels of personal time and expertise given to engineering education, and the ability to serve as an exceptional role model for students. Throughout his 37 years of service to Dartmouth, his work has been anchored by a deep commitment to collaborating across disciplines and to mentoring students.

Last year, Fraser led Formula Hybrid to earn one of the most coveted prizes in engineering education: The ABET Innovation Award. Formula Hybrid was selected—in the words of Steven Cramer, chair of the ABET Innovation Award Subcommittee and vice provost for teaching and learning at the University of Wisconsin-Madison—“because of its broad and sustained impact in innovative energy-efficient design experiences that enhance the 21st-century skills of students.”

The teams gather for a group photo. (Photo by Bruce Fraser) 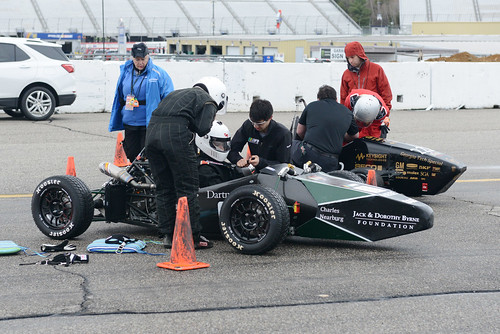