At the 72nd Annual Technology & Engineering Emmy Awards on November 4, Professor Eric Fossum will be honored for inventing and pioneering the intra-pixel charge transfer CMOS image sensor. The honor, a first for a Dartmouth Engineering faculty member, is being awarded to Fossum by the National Academy of Television Arts and Sciences (NATAS). 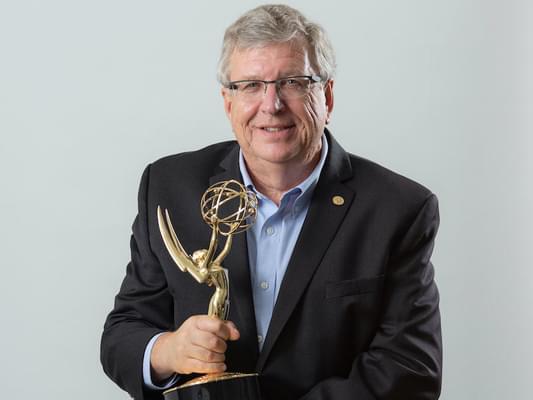 Fossum, who will be the only individual honored at the ceremony, invented the CMOS active pixel image sensor with intra-pixel charge transfer — which is the basis for all modern CMOS image sensors, including almost all cell-phone cameras, webcams, and many digital-still cameras — while working at the NASA Jet Propulsion Laboratory (JPL) at Caltech. The technology was further developed by spinoff Photobit and Photobit's partner, Eastman Kodak. Both Eastman Kodak and ON Semiconductor, which acquired yet another spinoff of the Photobit technology via Aptina, will also be honored.

"I am very happy to see the Emmy on my shelf because it reminds me of how new technology can take unexpected turns, and how much the CMOS image sensor technology has benefitted society," said Fossum, who already received his statuette in the mail. "I want to recognize my team members at JPL and at Photobit, and the efforts of thousands of engineers around the world that further improved the technology, although the early JPL inventions remain the basis of the six billion CMOS image sensors made each year."

"One other surprise was learning about the 70-plus year-old design of the statuette. The name 'Emmy' invokes the nickname 'Immy' for old image orthicon vacuum-tube cameras, while the figure represents the arts and its muse, and the atom she holds represents the electrons of television technology. What an exquisite way to express the creative symbiosis of the arts and technology."

NATAS' Technology & Engineering awards honor development and innovation in broadcast technology and recognize breakthroughs in technology that have a significant effect on television engineering, according to the organization. Technology & Engineering Emmys are awarded to an individual, a company, or to a scientific or technical organization for developments and/or standardization involved in engineering technologies which either represent so extensive an improvement on existing methods or are so innovative in nature that they materially have affected the transmission, recording, or reception of television.

"The Technology and Engineering Emmy Awards have always recognized the talented and innovative leaders and companies that have made the incredible world of television possible," said Robert Seidel, Chair, Technology & Engineering Committee, NATAS, in a press release announcing the winners.

The ceremony will take place on Thursday, November 4 at 8:00pm. Viewers can watch the livestream or watch on-demand after the ceremony.