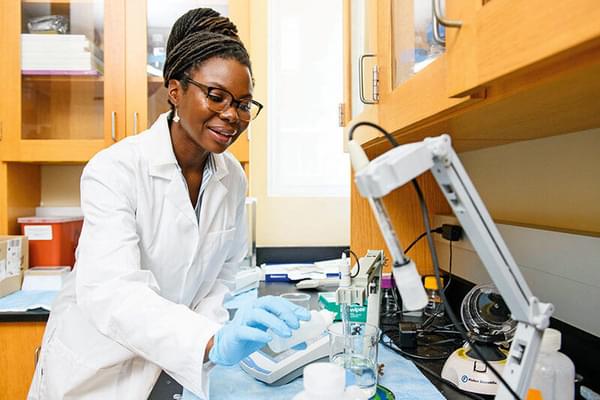 Clemson University bioengineering professor Renee Cottle ’07 Th’09 has earned the 2021 Pinnacle Research Award to advance her study of therapies to treat liver disease. She leads a team working with CRISPR-Cas technology, a powerful tool that enables scientists to make alterations to the human genome for treatment of diseases. “My laboratory is devoted to developing nonviral approaches for delivering CRISPR components into hepatocytes for liver-directed therapies,” she says. Cottle’s lab— which includes four PhD, one MS, and 12 undergraduate students—is also developing point-of-care devices for patients. She created two research classes to further these efforts. “One course provides students an opportunity to design and validate gene-editing tools for treatment of genetic diseases affecting the liver,” says Cottle. “My second course is focused on the development of an at-home monitoring device for patients with nonketotic hyperglycemia.” Working with students in the lab is both inspiring and rewarding, she says. “They bring out the best in me as a researcher: I study hard and push the limits of science so I can teach new things to my students,” says Cottle. “I also enjoy watching my students grow intellectually, become experts in the gene-editing field, and advance to great careers.” That trajectory mirrors her own career. “I gained hands-on experience in bioengineering while working on my capstone design project to develop a sterilizer device for IV fluids and my honors thesis project mentored by Dr. Tillman Gerngross and Ronald Taylor investigating peptide mimics for vibrio cholerae LPS toward a vaccine for cholera,” says Cottle. She credits that background with helping her land a National Science Foundation Graduate Research Fellowship before she entered the PhD program in biomedical engineering at Georgia Tech and Emory University. 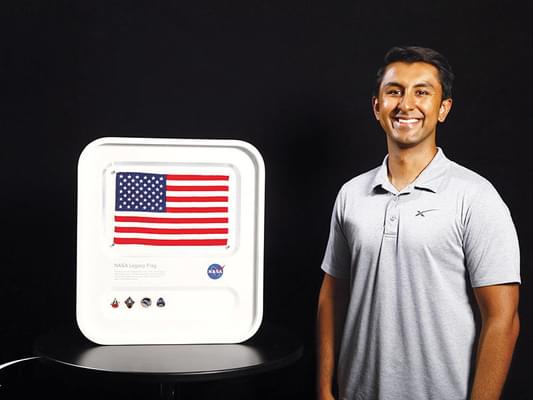 Launch engineer Shaun Sengupta ’17 Th’18 likes it when things come apart. “When a payload separates from the rocket, I feel a great sense of pride for my team and the effort we put into ensuring the satellite reaches its orbit,” he says. As part of SpaceX’s payload integration team, Sengupta is responsible for streamlining systems on the launch site at Cape Canaveral, Fla., and ensuring the reliability of flight hardware. Much of his work centers on launches of SpaceX’s Falcon 9 and the reusable Falcon Heavy, the world’s most powerful rocket. His SpaceX adventures are on the rise. “This summer I had the opportunity to work on the new Starship and Super Heavy vehicles that will soon take humanity to Mars,” says Sengupta. “I was absolutely stunned at the massive scale of that rocket and the pace of the production facility. When fully stacked, the Starship-Super Heavy vehicle is about 400 feet tall, which I couldn’t appreciate until I saw it up close. With about 30 Raptor engines, I can’t even imagine how loud it will be during ascent!”

"When a payload separates from the rocket, I feel a great sense of pride for my team and the effort we put into ensuring the satellite reaches its orbit."

Vermont Engineer of the Year

Vermont Technical College Professor Scott Sabol ’88 Th’88 is known for taking his motorcycle out in the summer to search for buildings and bridges he can talk about in class. A licensed structural engineer who has taught architectural and building engineering technology for more than 20 years, Sabol has been named Vermont’s 2021 Engineer of the Year. He has also earned the college’s highest faculty awards and helped Norwich University develop an online master’s program in civil engineering. His professional engineering work included research for the Federal Highway Administration and development of a national strategic plan for integrating fiber-reinforced polymers into the transportation infrastructure. The Vermont native’s current activities include volunteering with the Equity Alliance, a nonprofit focused on attracting a diverse workforce to the Green Mountain state.

Companies are launching smaller satellites into space in larger quantities. Phase Four chief technology officer Umair Siddiqui ’10 is using his background in plasma physics to shrink the technology while scaling up production. Instead of the cathodes required by traditional plasma thrusters, “we’ve developed a new kind of engine that uses AC radiofrequency waves to accelerate the plasma,” Siddiqui explains. “In doing so we’ve shrunk the electronics more than 50 percent over traditional thrusters, which vastly simplifies the manufacturing and reduces the lead time.” At less than 6 kilograms, Phase Four’s first-generation Maxwell engine, Maxwell Block 1, is the smallest 400-watt plasma thruster in orbit. But that small package delivers big returns: The engines are designed to extend the lifespan of the satellites by allowing them to move in orbit for several years. Capella Space satellites launched in January provided the first evidence that Phase Four’s technology worked in orbit as designed. “It was the first electrodeless thruster ever to operate successfully in space,” Siddiqui told SpaceNews. His focus now is on production. The Los Angeles, Calif.-based company is building a manufacturing line to cut the time from order to delivery by 75 percent—a mere four months. 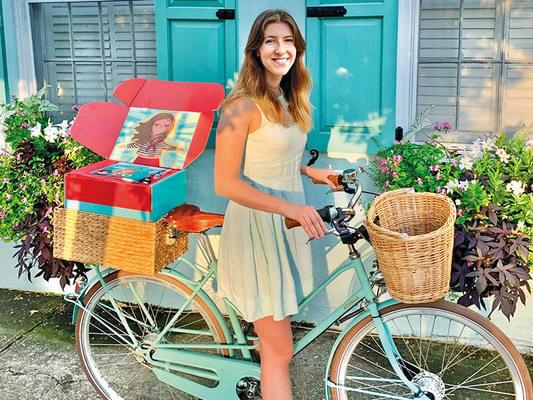 Thinking Inside the Box

When a friend’s 7-year-old daughter, Coco, was diagnosed with leukemia last summer, Casey Conway Tulloch ’13 created a special care package to lift the child’s spirits while she was hospitalized. So began Coco’s Adventure Box (kcsadventureboxes.com), a collection of goodie bags designed around a story called Captain Coco’s Sea Adventure. “It’s a reimagined care package designed to help little girls facing long hospital stays build resilience,” says Tulloch. “The gifts inside encourage these children to play along with a story that reframes many of the challenges encountered during treatment.” The six chapters address issues girls ages 6 to 11 might face and offer costumes and activities to ease their way—such as a message-in-a-bottle from the family dog asking them to write back or a mermaid wig for when they lose their hair to chemo. Each goodie bag has a surprise—glow-in-the-dark stars, a cloud guide, a puzzle, or even a kaleidoscope—with a note about “its ability to look at something in a new and beautiful way,” says Tulloch. She has been testing the adventure boxes with children at a hospital in Charleston, S.C., and hopes to build a network of participating hospitals and offer boxes for sale in 2022.

Chair of the Kenya Private Sector Alliance (KEPSA), Nicholas Nesbitt ’85 Th’86 Th’87, knows how to bring business and government leaders together. His ability to navigate the challenges of a tumultuous year have earned him the No. 4 spot among 2021’s “Top 25 Most Influential Chairs of Board Impacting Business.” According to Business Monthly, “One of his hallmark achievements has been to lead the private-sector engagement with government that resulted in the improvement of Kenya’s Ease of Doing Business ranking and the rationalization and easing of the tax burden to mitigate the adverse effects of the COVID-19 pandemic.” A general manager of IBM Eastern Africa from 2013 to 2020, Nesbitt was also awarded the Order of the Grand Warrior by the president of Kenya in recogn

Kelp is on the Way

Marty Odlin ’04 Th’07 and his Portland, ME,-based company, Running Tide, are trying a new way to reverse climate change and the decline of marine life: growing kelp to pull carbon dioxide from the atmosphere and bury it on the ocean floor. “What we have to do is run the oil industry in reverse,” the CEO recently told National Public Radio. He imagines kelp micro-farms floating on biodegradable buoys hundreds of miles offshore, over the deepest parts of the world’s oceans. The kelp soaks up carbon, via photosynthesis, and grows. After about seven months, the mature blades get too heavy for their buoys, and sink. “Once it goes down below 1,000 meters, it’s not coming back up, because the pressures are so great,” Odlin told Fast Company. “So you can get at least 1,000 years of sequestration. More likely, it will turn into oil or sediment and be sequestered on the geologic timescale—millions of years.” At large scale, kelp farming could make a major impact. A 2019 study calculated that growing and sinking macroalgae in just a fraction of federal waters off the California coast could fully offset emissions from the state’s enormous agriculture industry.

The Dartmouth Engineering Board of Advisors welcomed five new members for three-year terms. They include Vijay Kumar, the Nemirovsky Family Dean of Penn Engineering and a mechanical engineering professor at the University of Pennsylvania since 1987; Jian Lu Th’93, corporate vice president of LinkedIn and president of LinkedIn China, overseeing the company’s research and development; Christopher McKenna ’88, co-founder and managing partner of Carleton McKenna & Co, an investment bank serving specialty manufacturing, service, and technology companies; Tracey Pettengill Turner ’93, founder and executive chair of Copia Global, which is bringing mobile commerce to East Africa; and Katherine Osborne Valdez ’94 Th’95, board president of the Powell Foundation, which focuses on K-12 public education grantmaking in Texas, and a former foreign service officer with the U.S. Agency for International Development.

The Dartmouth Engineering Board of Advisors has named Carol Muller ’77 a 2020 Sylvanus Thayer Fellow in recognition of her service to and support of Thayer School. Muller came to the school as assistant dean in 1987 with administrative experience in higher education and a PhD in administration and policy analysis from Stanford. She also had the benefit of coming of age during the 1970s “and the wild, woolly, and weird gendered experiences of being in the second coeducational class at Dartmouth,” she says. In her early days of working at Thayer, the faculty was all male, and only a few of the students were female. “Nowhere in my job description were ‘diversity’ or ‘inclusion,’” she says. “But as a feminist with a passion for equal opportunity and concern about occupational segregation, I couldn’t support that gendered status quo.” In 1990, with the backing of Dartmouth Engineering Dean Charles Hutchinson ’68A, Muller joined with chemistry professor Karen Wetterhahn, then associate dean of the arts and sciences, to design and implement the Women in Science Project (WISP). Muller stressed the need for women in the sciences—including engineering—to have role models, mentoring, and a sense of community. Wetterhahn added hands-on, active engagement in lab work—the research internships that became a cornerstone of the project. Muller engaged faculty, senior leaders, admissions and career services staff, and obtained funding from the College and the National Science Foundation and the Sloan Foundation. “It takes not only ideas for change, but the right timing and salience to muster the support for launching something like WISP,” she says. Three decades later, the project has become a major part of the Dartmouth experience. “WISP is a brand,” says Muller. In 1996 Muller returned to Stanford, where she founded an online global nonprofit mentoring network—MentorNet—for diversity in engineering and science. She then served as operating manager for Stanford’s 70-member electrical engineering department and led WISE Ventures, which focused on campus-wide equity in STEM. After a career devoted to helping countless students succeed in science and engineering, Muller retired last spring.

The Board of Advisors also named Ralph Crump ’66A a Sylvanus Thayer Fellow posthumously. Crump, who died March 16, 2020, at age 96, invented technologies that transformed everything from the processes of removing cataracts and purifying water to the development of bar coding and 3-D printing. In the 1960s Dean Myron Tribus tapped him to help guide Thayer’s entrepreneurial activities. Crump served on the Board of Advisors for 24 years, and he and his wife, Marjorie, established the Myron Tribus Chair in Engineering and funded the PhD Innovation Program. In 1979 he received the school’s highest honor, the Robert Fletcher Award.