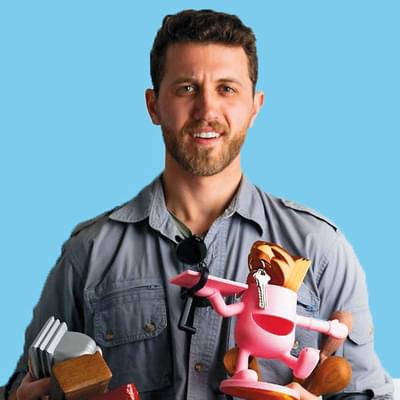 “Industrial designers can act as a nexus between engineers, artists, marketers, strategists, architects, and founders,” says Evan Landau ’15, founder of N.Y.C.-based Landau Design Strategy + Consulting. “There’s just so much stuff in the world now that I think it’s important to prioritize creating products with meaning that can make someone’s life better instead of just flashy objects and battery-operated wine openers.” Design is also in his blood: His father is a product designer and manufacturer, his mother is an interior designer, and his grandmother was an artist. The three owned a showroom in Long Island where they offered designer products and furniture. “I’ve spent a lot of time surrounded by everyday objects that I’ve since seen in museums and textbooks and that certainly had an influence on me,” says Landau. Recent clients include a company in the auto industry, a psychologist, and a produce grower-distributor. “I’m also working for a startup founded by Patrick Sheehan ’15, helping to create a line of functional food and beverage products to improve sleep and performance,” he says. Landau hopes to eventually tackle waste—using materials typically tossed out to create new objects. “My master’s thesis focused on ways to process mixed-paper waste into a manufacturing material to offset the use of plastics,” he says. “I’ve been in hot pursuit of design solutions for putting the world’s waste to use.”

Resonant Link Chief Scientific Officer Phyo Aung Kyaw ’19 and CEO Grayson Zulauf ’12 Th’13 have been named to the 2021 “Forbes 30 Under 30” list of top entrepreneurs in the field of energy. They are developing a wireless charger that can quickly and autonomously recharge fleets of robots, drones, and EVs. “With no private capital, the Burlington, Vt.-based startup has reached profitability with more than $1.5 million in customer revenue and non-dilutive funding, including multiple Fortune 500 customers,” according to Forbes. Also leading Resonant Link’s efforts are Thayer Professor Charles Sullivan, who is the firm’s senior scientist and a leader in electromagnetics for power electronics, and former Dartmouth research postdoc Aaron Stein, who serves as president and chief technology officer. 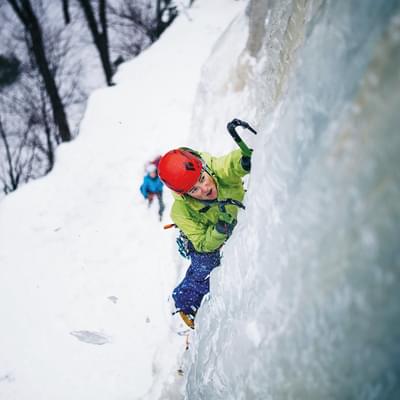 Natalie Afonina Th’16 Th’17 is taking a sabbatical from robotics to scale other challenges this winter. “I want to dedicate more time to my ambitions as a professional ice climber,” says Afonina, who previously worked for Mapbox and Uber’s advanced technologies group. She is teaching ice clinics at festivals and climbing across the United States. She says she brings a similar focus to climbing and engineering. “Both in my climbing and at work, I focus on zooming in to pay attention to the micro-details and zooming out to keep an eye on the bigger picture,” she says. “When scaling frozen waterfalls with sharp tools in your hands and crampon claws on your feet, the only rule is, ‘do not fall.’ People assume that I’m an adrenaline junky, but friends know I’m the exact opposite of that: I’m a planner, a risk-mitigator.” A favorite climbing area is in the mountains of Wyoming, though Lake Willoughby in Vermont is a close second. “I have fond memories of driving up there Tuesday afternoons to get a couple laps in between engineering lectures and problem sets.” 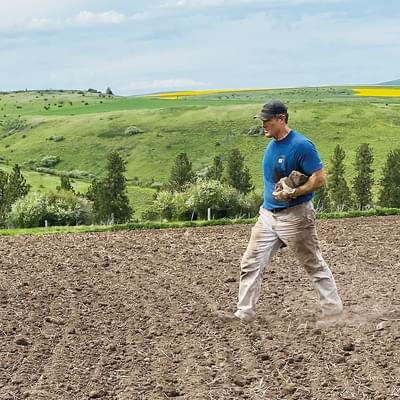 When his 9-year-old nephew was able to operate a robotic rock-picker, Brent Frei ’88 Th’89 knew his design was working. Growing up on a family farm in Grangeville, Idaho, Frei hand-picked a lot of rocks out of fields. And when he saw his then-80-year-old father still picking them up by hand, the former founder of Onyx Software envisioned “a Roomba for rock picking.” Launched in 2017, his TerraClear uses drone photography to map rocks in a field and a treaded claw mounted to a tractor or other vehicle to lift them out of the dirt. He’s testing the device in Grangeville, where his father, brother, and sister manage the 6,000-acre Isidore Farms. “We built six pickers for testing this past fall,” Frei says. “Our goal is to enable picking a rock every three to five seconds—a five- to ten-times improvement over current methods.” The 23-member TerraClear team is selling units in the Northwest and refining an autonomous picking option. “My dad is no longer picking rocks,” Frei says. “Instead, he’s enjoying the fruits of that.” 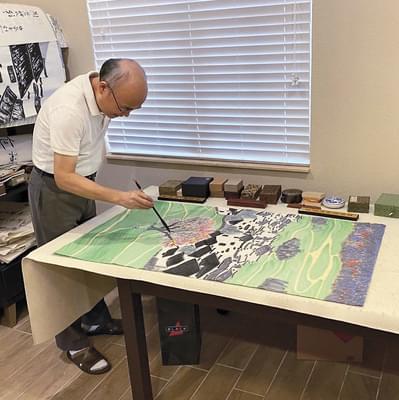 Biomedical engineer Huabei Jiang Th’96 has found scientific inspiration in the Chinese arts he first began exploring as a child. “My ability and skill in art helped me make breakthroughs in scientific research by sensing the beauty contained in mathematical equations I derived,” he says. Currently the director of the University of Florida Center for Advanced Biomedical Imaging, Jiang has made pioneering contributions to the field of diffuse optical tomography (DOT) and has developed techniques that use DOT to detect breast cancer, epilepsy, and osteoarthritis. His 23-year career teaching and doing research has also been enriched by a lifetime of painting and practicing calligraphy. “Memories and photographs of my hometown of Sichuan and other places in China that have similar landscapes draw my inspiration,” says Jiang, who works in ink, pencil, and pastel. The author of more than 400 peer-reviewed scientific articles also took up poetry three years ago. “I focus on subjects related to my hometown, my parents, my friends, and my experience in America since early 1990—I actually wrote a few about my years in Hanover.” His connection to the College—where he earned PhDs in engineering and philosophy—runs deep. His most recent book, Fluorescence Molecular Tomography, is dedicated to Thayer and Dartmouth.

Acoustician Kenneth Kaliski ’85 Th’02 has earned the Institute of Noise Control Engineering’s William W. Lang Award for the Distinguished Noise Control Engineer. “Noise is unique in that it is something everyone can relate to,” says Kaliski, senior director of Resource Systems Group in White River Junction, Vt. “We are all experts in what we consider noise, but there are only a few of us that understand the complex mechanisms such that we can engineer successful solutions.” His work focuses on wind turbine, architectural, and transportation acoustics as well as community noise monitoring and modeling.

About 25 percent of the U.S. population suffers from fat in the liver, which can lead to fibrosis of the liver and liver failure. Chris Frangieh ’17 Th’17 is part of the MIT team that has developed a diagnostic tool to detect those conditions. He is a lead coauthor on the research study, which appeared in a November issue of Nature Biomedical Engineering. The 6-by-4-inch sensor uses nuclear magnetic resonance to measure how water diffuses through tissue, which can reveal how much fat is present. The research is an outflow from his biomedical engineering studies at Thayer. “In ENGS 21 I gained experience with imaging, low-cost medical devices, and patient-centered design; in ENGS 89/90 I worked on a bioimpedance device for monitoring hydration levels in athletes,” he says. He’s now applying his PhD studies in computational biology and biological engineering to assess why some cancer patients don’t respond to immunotherapy drugs. “I hope to focus on projects that have the potential to impact human health,” says Frangieh, “and transition these technologies into the clinic.”

As chair of the Maryland Zoo board of trustees, Jennifer Lowry ’90 Th’91 helps oversee more than 1,500 animals across 135 acres in northwestern Baltimore. Lowry, who is also vice president of risk in corporate finance for global spice company McCormick, has brought in J. Kirby Fowler Jr. ’88 as the zoo’s new president and CEO and is supporting a $20-million renovation of the lion, giraffe, and elephant habitats. The former center on four Ivy League championship women’s basketball teams, Lowry earned a BE from Thayer and a master’s in management from Northwestern University Kellogg School of Management. 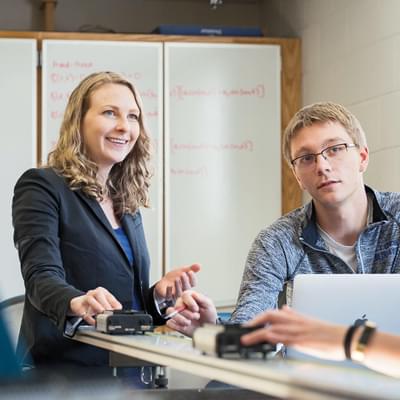 Sara Atwood ’03 Th’04 Th’05 has been named founding dean of the Elizabethtown College School of Engineering, Mathematics, and Computer Science. There, she has established a research program in engineering education with almost $1 million in funding from the National Science Foundation. Atwood’s most recent grant funds research into the role internships play in forming engineering professional identity and internship accessibility for first-generation, low-income students. Her initial analyses show these students are significantly less likely to have an engineering internship (42 percent) compared to their continuing-generation, higher-income peers (58 percent). “Statistical modeling shows that first-generation and low-income status remain significant factors in predicting having an internship, after controlling for other factors such as GPA, institution, engineering field, and other demographic factors,” she says. Her goal is to engage students from a broad range of backgrounds—building on STEM studies they were exposed to in middle and high school. STEM “programs have doubled the percent of women in engineering, and more people are being exposed to it at an earlier age,” says Atwood. “Ten years ago, people came in here and didn’t really know what engineering meant.” Her efforts are gaining a national reach, most recently with a chapter, “Mastery-Based Learning in Mechanical Engineering,” she coauthored in the 2020 Mechanical Engineering Education Handbook and a workshop she led at the 2020 meeting of the American Society for Engineering Education.