On the Job: Max Fagin

Fagin’s trajectory in space exploration has taken him from space vehicle design at NASA Ames and SpaceX to on-orbit satellite manufacturing at Made In Space and now to Blue Origin. There, he working as an aerospace systems engineer on Orbital Reef, a commercial space station designed for launch to low Earth orbit. 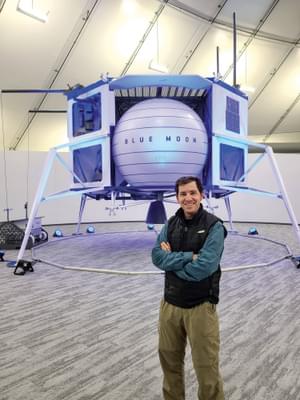 What are some of the skills you need to succeed in such a tremendous undertaking?

You need at least a passing familiarity with everything that goes into building a crewed spacecraft—not enough to be an expert in everything, but at least enough to know the right questions to ask the right people. Thayer was the perfect place to get that “bit of everything” engineering background. I eventually specialized in astrodynamics and spacecraft trajectories in grad school, but most of my day-to-day work is still more conventional engineering, just applied to spacecraft—design trades, materials, power budgets, spreadsheets—the nuts-and-bolts kind of stuff that I learned in the machine shop or in the CAD lab at Thayer.

"I’m ultimately here because I want to put people in space and eventually join them."

What aspects of your position engage you?

I’m exhilarated to be working on human spaceflight again! The past five years I’d been working on satellites and un-crewed spacecraft. I learned a lot about the industry and really appreciated the work, but I’m ultimately here because I want to put people in space and eventually join them. It’s great to be on a project where humans are a part of the equation again instead of just robots and machines.

Has there been anything unexpected as you’ve advanced through the industry?

I’ve been continually surprised at how everyone working everywhere in human spaceflight—be it government or private sector, big company or small—has the same passion for the mission. Even between groups that are nominally in competition, there is still a camaraderie and a sense that a win for one is a win for all. That’s even true across national borders.

What do you see on the horizon?

A continuing trend toward private companies taking over the task of living and working in space, opening up markets and industries in space that didn’t exist before, and freeing up NASA to focus on the horizon pushing exploration activities beyond Earth orbit again.

This article appeared in the Spring 2022 issue of the Dartmouth Engineer magazine.