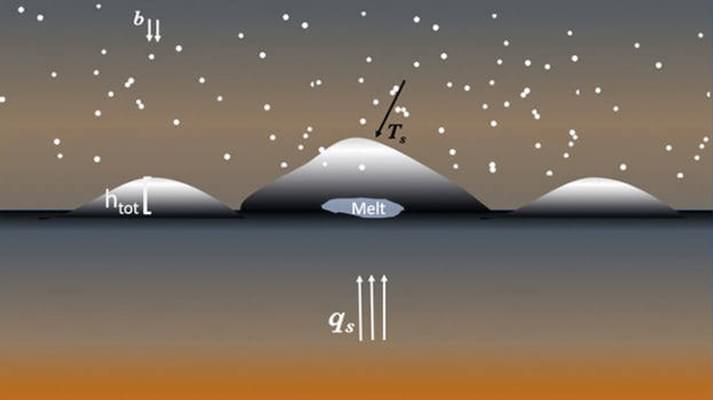 A new study published in Science Advances suggests that the most habitable region for life on Mars would have been deep below its surface, likely due to subsurface melting of thick ice sheets fueled by geothermal heat.

The study used a model designed and constructed by Jacob Buffo, a postdoctoral researcher working in Professor Colin Meyer’s lab, to simulate the physical and thermal evolution of thick Martian ice sheets.

“Using the model, we wanted to determine if environmental conditions existed in Mars’ history that would allow the base of the ice sheets to melt,” says Buffo. “If melt can occur, it has important implications for the generation of fluvial features—such as ancient riverbeds—on Mars’ surface, as well as the production of potentially habitable environments on ancient Mars.”

The conditions needed for subsurface melting of thick ice sheets would have been ubiquitous on ancient Mars. But even if Mars had a warm and wet climate 4 billion years ago, with the loss of the magnetic field, atmospheric thinning, and subsequent drop in global temperatures through time, liquid water may have been stable only at great depths. Therefore, if life ever originated on Mars, it may have followed liquid water to progressively greater depths.

Scientists soon will be able to better assess the role of geothermal heat in the habitability of Mars thanks to NASA’s Mars InSight spacecraft, which landed in 2018.