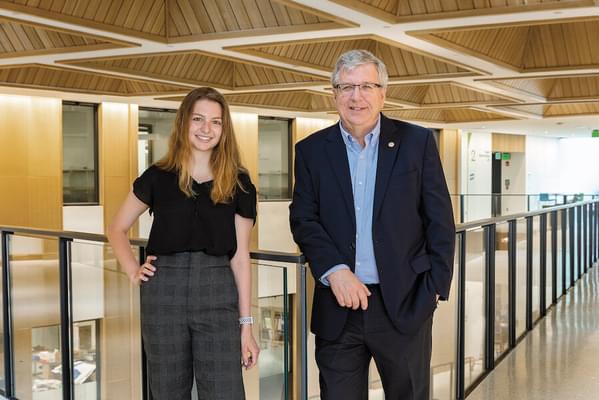 Katherine "Kat" Lasonde '23, from Winnetka, IL, is majoring in engineering physics with a minor in computer science. She is pictured with Professor Eric Fossum in Dartmouth's Class of 1982 Engineering and Computer Science Center. (Photo by Don Hamerman)

Why is quantum computing such a groundbreaking field?

Kat: Because quantum computers use laws of quantum physics rather than classical physics, they're really good at simulating molecules and molecular structures. Quantum computers have the potential to simulate different types of carbon neutral or carbon negative molecules that can significantly help the environment. For instance, to run a simulation of nitrogenase on a regular laptop or classical computer would take more than eight trillion years. The same simulation would take less than a day on a quantum computer. Because quantum computers aren't powerful enough at present to simulate molecules that help counteract climate change, my plan is to work on building those computers. Specifically, I'm exploring the use of Professor Fossum's quanta image sensor for quantum computing applications.

Professor Fossum: The goal is to investigate whether the quanta image sensor technology, which originated in my lab, might be useful for quantum computing readout of qubits, the memory storage bits for quantum computers. Kat is working with the physics department and Thayer School of Engineering to try to create a proof-of-concept experiment that shows that the use of the quanta image sensor technology—because of its super low-light sensitivity—makes for better readout than standard camera technology.

Kat: My dad was an engineer, so I grew up fascinated by the ability to fix and build things and never lost my love of tinkering. In my first year at Dartmouth, I was matched with Professor Whitfield, who studies quantum computing in the physics department, through the Women in Science Program. I had no idea what a quantum computer was, but as I started doing more and more research, I ended up really enjoying it and wanted to further explore the hardware work that Professor Fossum does. I emailed him out of the blue and said, "Hi, my name's Kat, and I'm really interested in doing work with you." And he said "Cool! Sounds great."

Professor Fossum: The fact that I have this chance to work with Kat to explore this area is an awesome opportunity for me, too. Working with undergraduates is fun because they're filled with enthusiasm, and Kat's really tried hard to learn what the state of the art is in this area and to advance that.

Kat: When I first started this project, I actually didn't even know that I wanted to connect it back to environmental science. But because I had that time in Professor Fossum's lab and exposure to his image sensor technology, I thought, "Oh, maybe I can build a quantum computer and then stop climate change." It's given me a lot of confidence that this is what I want to do. After graduation, I hope to work in the quantum computing industry and one day earn my master's in environmental science or environmental technology.

What's special about doing research at Dartmouth in particular?

Professor Fossum: There are two aspects to doing research. One is drilling deep in particular fields—I'm kind of a 'driller' in the image sensor field. But there's also the dimension of cross-disciplinary work—instead of drilling down, you're drilling across. That's equally important, and I think Dartmouth has done a good job of supporting both modes of research.

Kat: I've been able to have hands-on research experience as an undergraduate in a really renowned laboratory with someone who has helped so many students before me. The ability to do cutting-edge research is just so cool. Quantum computing is a very young field, so there's a lot of potential for me to make an impact.

Professor Fossum: The reason I came to Dartmouth after being retired twice was to give back to society and to give back to people. Dartmouth is an outstanding place for undergraduate education not just because of the experiential learning that happens in its classrooms. The College also offers students opportunities to work closely with faculty members on leading-edge research across the campus. If I were an undergraduate and I had a long-term interest in furthering knowledge, this would be a top stop for me.