Dartmouth's Formula Hybrid+Electric Competition Is Back on Track at NHMS

After two years of virtual competition, Formula Hybrid+Electric (FH+E) — founded and run by Dartmouth — is bringing top engineering student teams back to New Hampshire Motor Speedway (NHMS) for their 16th annual competition on May 2–5. 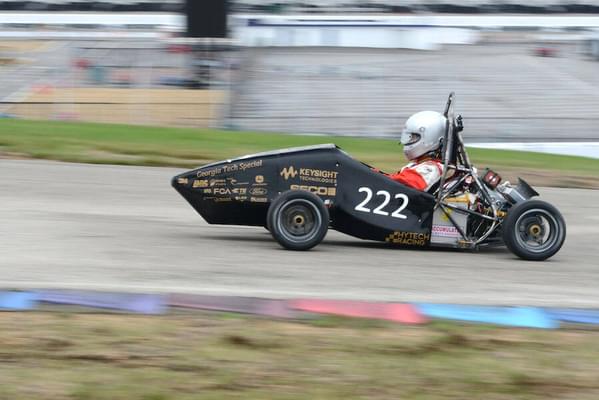 Last time the competition was at the Speedway, Georgia Tech's HyTech Racing team defended their title in the electric-only category with high scores in Design, Autocross, and Endurance — finishing all 44 laps of that event. (Photo by Kathryn Lapierre.)

Eighteen teams of undergraduate and graduate engineering students from across the US and Canada will meet to compete with the four hybrid and 14 electric high-performance race cars they designed and built over the last ten months.

Each vehicle will need to pass numerous technical and safety inspections in order to make it onto the track at NHMS, also known as "The Magic Mile."

"We are long overdue to once again see and hear the cars run on track," said Max Warnock, vice president of the Lafayette College team Lafayette Motorsports. "Formula Hybrid has given us amazing opportunities to learn despite COVID's presence, but bringing our car to New Hampshire Motor Speedway is the sort of testing we need now. So many electric and hybrid technologies have advanced both in competition and production. We can’t wait to catch up with industry professionals and each other at long last."

Many top engineering students engage in this competition because they want to collaborate with a team to build something highly complex and important not only to them but also to the future of the world. Another perk of the competition is the chance to be scouted for an engineering job by top car manufacturers and other high-tech companies from across the country, including Toyota, the official car and truck of NHMS, BAE, AVL and McLaren Applied Technologies.

"Formula Hybrid+Electric is the only student-level competition in the world that has a full hybrid class. Developing a battery-electric vehicle is difficult, while developing a hybrid vehicle is that much more challenging. The important thing is that the students learn to work closely in cross-functional groups so that once they join the workforce, they can start contributing from the start. Our alumni are working at the traditional car companies but also at Tesla, Lucid Motors, SpaceX, Boeing and BAE Systems — companies that value engineers that can work in multi-disciplinary teams."

Similar to the Formula SAE® competition, students compete in aspects of design, acceleration, handling and endurance of their vehicle while abiding by rules that minimize risk and preserve students' freedom to innovate. FH+E teams, however, are faced with the additional challenge of optimizing both energy efficiency and sustainability of materials used in their cars. As a result, FH+E is the only competition that requires a unique collaboration between mechanical engineers, electrical engineers and computer scientists in the planning and building of their cars.

While the pandemic forced the cancellation of the on-track events in 2020 and 2021, the presentation events were still held via Zoom. The Virtual Racing Challenge was also added in 2021 on iRacing's NHMS road course.

In 2018, Formula Hybrid was awarded one of the most coveted prizes in engineering education, the ABET Innovation Award. Formula Hybrid became Formula Hybrid + Electric in 2020 to better reflect that although it started as a hybrid-only event, there have been both hybrid and electric-only competition classes since 2012.

For spectators, Wednesday, May 4 is the "most fun-filled" day to visit, according to Jessica Kinzie, the competition's coordinating manager. The autocross and acceleration events run from 10:00am–3:30pm, and it's also FH+E School Day for middle and high school students to enjoy expert-guided tours. For more information and a complete schedule, visit formula-hybrid.org.