John H. Currier '79 Th'81, a research engineer at Dartmouth who helped pioneer the revolutionary virtual tackling dummy that has helped make football safer, died early Monday, at the age of 64, after a battle with cancer. "Throughout his decades-long career at Thayer, John touched many lives, including the hundreds of engineering students he advised and mentored. For those of us who worked with him, John was more than a colleague. He was a beloved friend."

Alexis Abramson, Dean of Thayer School of Engineering at Dartmouth. 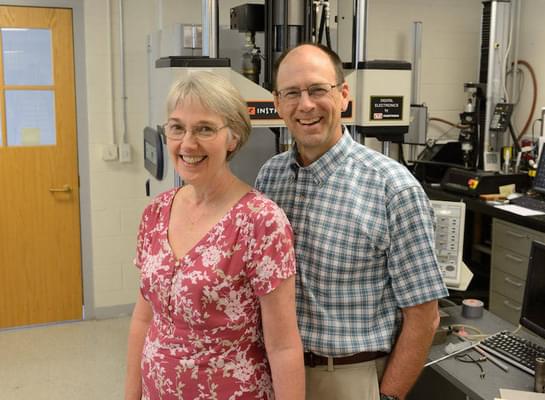 Currier was a dedicated member of the Dartmouth community for more than 40 years, starting from his time as an undergraduate where he earned his AB in engineering sciences from Dartmouth in 1979, and his BE and MS in engineering from Thayer in 1981, studying ice properties under the guidance of Professor Erland Schulson.

After graduation, Currier worked for 12 years in research and project planning for a petroleum company in Texas and Alaska, using the expertise he developed in his master's research, before returning to Dartmouth in 1994 when he began work at the Dartmouth Biomedical Engineering Center for Orthopaedics (DBEC). There Currier contributed to the study of polyethylene bearings in hip and knee prostheses, investigating wear and damage in knee bearings, the shelf and in vivo oxidation processes in in ultra-high-molecular-weight polyethylene components, and the performance of ceramic hip bearings. Currier's work has helped improve the lives of millions of artificial joint patients.

Currier, a Vermont native who grew up living and working at his family's multigenerational family farm in Danville, was known for his warmth, humility, and compassion across Dartmouth and Upper Valley communities. Throughout his time at Thayer, Currier was almost always the first to ask a question at the Dean's annual welcome and convocation, which earned him the nickname "Helen Thomas" after the longtime White House journalist who was often called upon to ask the first question at presidential press conferences.

Beyond his dedication to his students and his work, Currier was uncompromisingly devoted to his family: his wife Barbara, a senior research engineer at Thayer, and his children Zachary Th'12 and Katherine. In the early 1990s, John and Barbara Currier were featured in the Dallas Morning News for their unconventional work arrangement — the new parents shared one job, switching places in the office each week, so they also could each spend equal time at home with their first child. 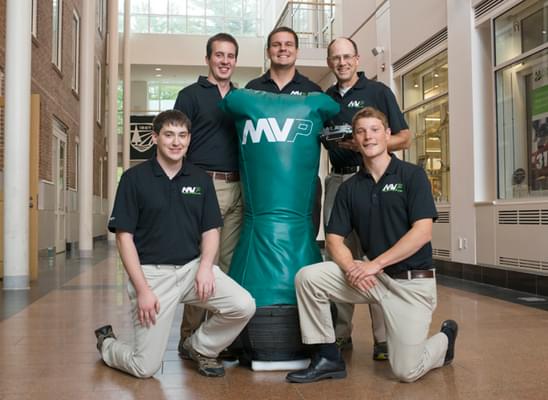 Co-creators of the Mobile Virtual Player. (Photo by John Sherman)

To the broader world, Currier was widely known for his role in the development of the Mobile Virtual Player (MVP), the innovative tackling dummy that has helped reduce concussions and life-threatening brain injuries in football and other contact sports.

During the fall of 2013, Currier served as an advisor to the ENGS 89/90 student team that developed the first MVP prototype, and in 2016, he co-founded the company now known as MVP Robotics, along with his former classmate and Dartmouth Football Coach Buddy Teevens '79 and two former engineering students. The MVP, memorably featured on The Late Show with Stephen Colbert, is now used widely by teams across the NFL, college football, youth leagues, and in the military.

"A central ethic of Thayer is that our value should be measured by the number of lives we've touched,” said Douglas Van Citters '99 Th'03 Th'06, Associate Dean of Undergraduate Education at Thayer who worked closely with Currier at DBEC. "Consider this wisdom in the context of John's 25-plus years of selfless work with many hundreds of engineering students, Dartmouth athletics, Upper Valley public schools, Upper Valley youth sports, the international orthopedic community, his church, MVP, the family farm, and most importantly, his family and friends."

Currier once told the Dartmouth Alumni Magazine in 2017 that his cancer diagnosis "…pushed me to sort out what's most important. Family and faith top that list, and then comes my incredible group of friends, colleagues, contacts, confidantes, inspirations and business associates who welcomed me into the '79 circle. … As I reflect on how much my Dartmouth classmates have expanded and enriched my world since coming off the farm in Vermont, it gives me a profound appreciation of what a game-changer Dartmouth has been for me."

Counseling services are available for students, faculty, and staff. Faculty and staff may contact the Faculty/Employee Assistance Program for counseling services. Students may reach out to Dartmouth Health Services or the College Chaplain at the Tucker Center.

Donations in John's memory may be made on the Dartmouth Giving Website (select "The Full Dartmouth Experience" and "I Would Like to Make My Gift in Memory of") or sent to: Dartmouth College, Gift Recording Office, 6066 Development Office, Hanover, NH 03755 (please specify "In memory of John Currier" in the memo).