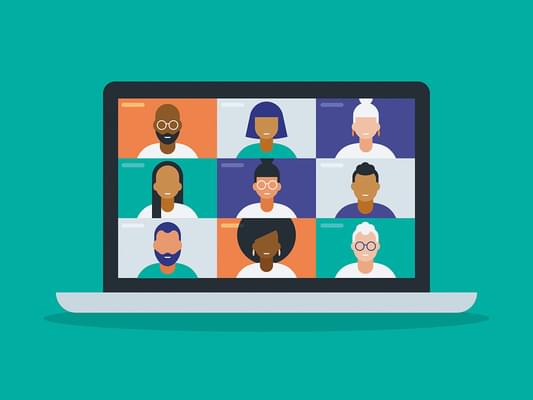 “Thayer was very much a hands-on place before the pandemic. It was buzzing, and anytime you walked down the hall you’d see some cool project going on. When we moved to remote learning, we had this question of how to make virtual spaces that are as dynamic as the physical spaces that we have.”

Jane Reynolds, user analyst support in Computing Services, faced this challenge when the pandemic forced disclosure. As Thayer shifted to remote work and learning in response to COVID-19, staff wondered if and how it would be possible to translate all that “buzz” to the digital sphere.

As has often been the case in this new era, technology was the answer. Using Zoom’s back-end software and the talents of Thayer graphic designer Patricio Sarzosa, the computing services team was able to digitally recreate one of Thayer’s most iconic spaces: the Couch Project Lab.

Upon entering the Virtual Couch Lab, the user has an aerial, illustrated layout that represents the actual physical space, including tables, couches, and even the break room. Each area represents a separate Zoom meeting room, and users can float between Zoom meetings throughout the room illustration. Users can also see thumbnail images and names of others currently using the space, including where each person is “sitting.”

The Virtual Couch Lab enables informal meetings, such as when coworkers want to catch up during a quick break or students want to meet in study groups.

“We’re getting a little bit of that sense of fun, buzz, creativity, and playfulness that everyone was really missing, and it’s all built on Zoom,” said Reynolds.

The Virtual Couch Lab even provides a space for campus groups outside of Thayer looking to create community online.

“The Virtual Couch Lab has been great for some of the groups I lead on campus,” says Ryan Hickox, professor of physics and astronomy and the house professor for West House. “The West House community held a virtual dinner with first-year students, and we’re hoping to be able to organize some events to bring first-year and upper-class Westians together in the coming weeks, with tables organized by interest or Big-Little student groups. I’ve also used the Virtual Couch Lab for meetings of my astronomy research group. It’s been refreshing to be able to gather on the ‘couches’ just as we would in my office in Wilder Hall!”

The Virtual Couch Lab was named the winner in the “Exemplary Educators” category of the 2020 Zoomtopia Innovation Awards, which showcases how customers are using the technology. Thayer has also been invited to attend Zoomtopia 2021 and was featured on Zoom’s blog and social channels.