Computer Engineer with an MBA

"My criteria for a good school was one that had an email address," says Vishal Gupta Th'94, the new CTO/CIO, Senior VP of Connect Technology at Lexmark, about shopping for master of science programs in engineering. "This was pre-internet days. Because my current school didn't have one, I thought if there was any school in America that had an email address, it's got to be good." 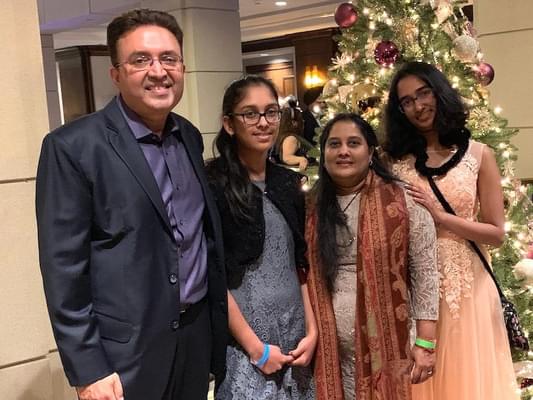 Vishal Gupta Th'94 with his family.

After earning his bachelor's degree in electrical and electronics engineering from the Birla Institute of Technology and Science (BITS) in Pilani, India, Vishal came to Dartmouth for an MS in engineering sciences focused on computer engineering. He got both his degree and that coveted email address.

"I liked Dartmouth not only because the brochure had a lot of email addresses but also I was interested in actually building computers and the program had that."

He came to campus expecting to work with then Dartmouth Engineering professor Barry Fagin, but soon learned that Professor George Cybenko had transferred there from University of Illinois Urbana-Champaign. "He's such an amazing guy. So I ended up, for a month, working for both. I took a lot of courses with Dr. Fagin. He was very gracious, he said, 'Totally your call. Whatever you want to do.'

"What I realized with Dr. Cybenko was that, like me, he viewed every problem as an amazing opportunity. Coming to the US, I'd never been on a plane. I didn't even know how to fasten a seatbelt. I was happy I learned that, and how to put a shower on, and the concept of an ATM card. Everything for me was just a wonderful amazement. And Dr. Cybenko, when he would talk, he had that same wonder in his eyes about creating things."

He decided to work with Cybenko on building a search engine using singular value decomposition and neural networks, which today is mainstream in the field of "deep learning."

"At that time it was very esoteric what we did, but we actually built a search engine before Google. I didn't even know it was an important thing, but it was the most intellectually stimulating time of my life."

Ten years after receiving his MS from Thayer, Vishal earned an MBA from The Wharton School at the University of Pennsylvania where he was a Palmer Scholar.

"I was already in management when I got my MBA. I actually didn't want to be in management but the sales team said, 'Hey, since you're good with the customers and you understand the technology, we think you can do these prototypes and show them why we are technically superior.'" He was so successful at it, he was soon asked to lead a team of sales engineers. "I said, 'No.' And my manager said, 'I've never had this conversation in my life where I'm trying to promote somebody and they say, no!'"

Ultimately, he took the job, but only after making sure he would still be able to actually do the work. "My manager said, 'That's exactly what we want. We want you to be a working manager.' And that sold it for me. And since I understood the software, I did end up being pretty hands-on."

Since then, his hands-on management style has benefitted several companies. Before joining Lexmark—a creator of IoT- and cloud-enabled imaging technologies—earlier this year, he had led a team of more than 1500 engineers at Unisys, served as senior VP of engineering at Symantec Corporation, and was also chief product and IoT officer for Silent Circle, a cybersecurity and privacy company in the mobile communications space. Prior to that, he held senior leadership roles with Cisco Systems, including VP of Vertical IoT Solutions.

When asked what else has contributed to his success in management, he replies, "One quality that's not always present in the management side is empathy. If developed and used correctly, it can do wonders. I was fortunate in my career to have rotated through many different functions. I went through strategy and service, then pre-sales, then I got into solution engineering, then building products end-to-end, then product management and being the GM, and ultimately CTO and CIO. Empathy helps you understand the other person, how to be in their shoes, what they're feeling and what motivates them. So having gone through different functions, different sizes of companies, I feel I can relate and speak in an open, transparent way. And that seems to work."

This year, Vishal was announced as one of the top 100 CIOs globally by the National Diversity Council. He offered his thoughts about the state of diversity in his field and why it matters:

"My wife is in technology. She was the only mechanical engineer who was a woman in a class of 40 students. Now, if I look at Unisys or Lexmark, we have about 30 percent women on my technology team. Ideally it should be 50 percent, but I see the glass as half full where at least it's better than the 10 percent I've seen before.

"We have a lot of opportunities to improve. One is to have more role models. We need to have—both at the board and at the CEO level—more women in technology and more representation for Black and Hispanic Americans. I've been through five technology companies and I've not seen a proportionate representation for them in management.

"Second, both my daughters went to the STEM high school called 'TJ' [Thomas Jefferson High School for Science and Technology], and it made them believe in the power of the possible, that sense of wonder. I think we need more such STEM schools that can attract diverse talent at an early age.

"We've made a lot of progress. We've got a very, very long way to go.

"Also, when you do create a diverse, inclusive team, you want an environment where those people can speak up and bring new thinking. When you have that, they will actually point out all the problems. The data shows that companies that are more diverse and inclusive outperform in both profitability and competitor differentiation.

"In my teams, I try to create diversity not only in the fact that you're a minority or a woman, but also diversity of thought, background, and age, to create an environment where people can poke holes and find problems before customers do, because your customer base is going to be diverse."

An introvert at heart, Vishal reflected on the culture and community of Thayer that helped him gain confidence and interpersonal skills:

"As I think about Thayer—and I do think about Thayer quite a bit— I think about the group projects, how you solve problems together, how you do creative thinking, how you have to do presentations. At BITS Pilani, it was mainly about intellect. There was limited focus on presentation or articulation, or any kind of collaboration. In fact, collaboration was strictly prohibited. It had to be your own work, not from anybody else, and then they just give you the toughest test and see if you can solve it.

"Thayer was different. And I think it prepares you for the real world in a much better way. Because in the real world, you're interacting with people. You're not only trying to get your ideas through, you also need to be a good listener to hear out and improve the ideas of others. And the projects and the presentations at Thayer I think are very, very helpful.

"Another thing I really liked was how accessible it was. I have great memories of helping with a class, disassembling an old TV or an old washing machine, and showing the students what it's made of, and that was so much fun—and then getting paid for it was amazing!"

"I would give them three pieces of advice.

"First, I would encourage students to do at least one internship. Going to Silicon Valley opened my eyes to the fact that I didn't understand strategy whatsoever. Take some time to get an outside-in perspective which will help you crystallize what you really like, and what you want to do.

"Next is to welcome continuous learning. Whatever you learn in school, it'll change. And if you want to be at that cutting edge, and not become more of just a talking head without true understanding, you need to be good at learning. Use your time not so much to master one area, but to become a better learner. That's going to give you that competitive advantage others won't have.

"Third is to take some risks. I did management consulting after my MS and it was the smartest thing I did because I learned the art of strategy and articulating it to an executive audience. I would've never learned those things had I just gone into deep programing right away. Taking risks will help you form your own path.

"And if you do what you enjoy, you'll automatically be good at it, because it creates that wonder in your eyes."