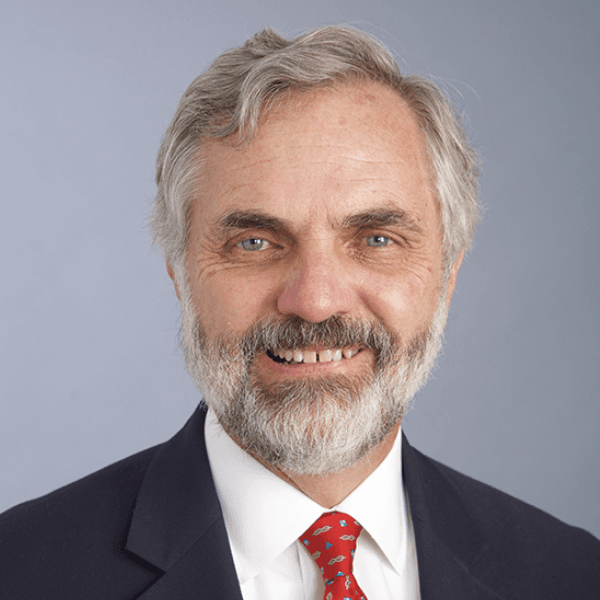 Professor Goodenough's research and writing at the intersection of law, economics, finance, media, technology, neuroscience and behavioral biology make him an authority in several emerging areas of law. He is expert in the impact of digital technology on law, with a particular emphasis on using the computational approaches to create computable contracts and digital business organizations and to improve the support provided by law for innovation and entrepreneurship generally.

His academic appointments reflect the breadth of his studies. At Vermont Law School, he has been on the faculty for more than 30 years and is currently a Research Professor. He is also currently affiliated faculty at Stanford’s CodeX Center for Legal Informatics, a Research Fellow of the Gruter Institute for Law and Behavioral Research, and an Adjunct Professor at Dartmouth's Thayer School of Engineering. He has also been a Faculty Fellow at The Berkman Center for Internet & Society at Harvard University, where he was co-director of the Law Lab project, an IPA Researcher and Visiting Fellow at the US Office of Financial Research, a Visiting Research Fellow at the Zoology Department of the University of Cambridge, a Lecturer in Law at the University of Pennsylvania Law School and a Visiting Professor at the Neurological Department of the Charite Medical School of Humboldt University in Berlin. Professor Goodenough has also served as co-director of the Education and Outreach Program of the MacArthur Foundation Law and Neuroscience Project.

Professor Goodenough has written on a wide variety of subjects relating law, business, the internet, and cognitive and behavioral science. His paper, Contract as automaton: representing a simple financial agreement in computational form” (2015/2021) co-authored with Mark Flood, is viewed as a foundational study on the link between law and computation. Law, Mind and Brain, co-edited with Michael Freeman, was published by Ashgate in February, 2009. With Semir Zeki, he edited the 2004 special issue of the Philosophical Transactions of the Royal Society devoted to Law and the Brain, reprinted in book form under that title by Oxford University Press in 2006. He is co-author of This Business of Television, now in its third edition. His shorter works include articles and chapters on law and neuroscience, intellectual property, the transmission of culture, and, with Richard Dawkins, a report in Nature on chain letters as evolving 'mind viruses'.

In business, Professor Goodenough is a co-founder, officer and director of Skopos Labs, Inc., an early stage company that applies machine learning and natural language processing to support services in law and finance.

Professor Goodenough received his BA from Harvard University and his JD from the University of Pennsylvania. After graduation, he practiced law in New York, first as an associate with Cleary, Gottlieb, Steen & Hamilton and then with Kay, Collyer & Boose, where he became a partner. In 2000 he won the Lee Loevinger Jurimetrics Research Award for his work on law and neuroscience, in 2002 the Gruter Institute Bene Merenti Award for outstanding achievements in law and behavioral research, and in 2010 the Vermont Law School Richard Brooks Faculty Scholarship Prize for scholarly achievement.

Co-organized and co-chaired the conference on Free Enterprise: Values in Action, co-sponsored by the Gruter Institution for Law and Behavioral Research and the Georgetown University Law Center on January 13-14, 2006